A History of Magic, Witchcraft, and the Occult

Magic is as old as humankind. As soon as early people became aware of their environment, they believed it to be filled with spirits whose aid they invoked to control it, either directly through shamans—who they thought could travel into the spirit world—or through art. It is thought that early people modeled figurines and painted animals on cave walls in the belief that doing so would give them magical power over their world.

As societies became more advanced, they brought hierarchy and order to spiritual life. From around 4000 bce, gods paralleled the rulers, priests, and nobility who held sway over Sumerian city-states or the ancient Egyptian kingdom. Far more is known about these more official religions than ever can be about their Neolithic antecedents because of the invention of writing. There is also more detail about magic, both good and bad. For example, an ancient Babylonian who broke the legs of a clay figurine to prevent a ghost wandering or a witch who tricked the god Marduk into inflicting disease on an enemy were intentionally harmful. Figurines buried beneath thresholds to prevent evil spirits entering, however, merely acknowledged and acted on the belief in evil forces in the spirit world that needed to be appeased.

Much of the paraphernalia of later magic appears surprisingly early. Ancient Babylonians and Egyptians wore protective amulets and created books of spells. In Egypt, spells were even inscribed on the walls of tombs to give the soul magical protection on its hazardous journey into the afterlife.

Words, both spoken and written, have long been seen as magical, too, and ancient Greeks and Romans produced curse tablets on which the expression of a dark desire, accompanied by the prescribed formulas, was thought to bring about its fulfillment.

Magicians soon developed their own techniques and philosophies. Sympathetic magic—the idea that curative substances should resemble the ailment  being magically treated (so, a yellow potion might cure jaundice)—was known to ancient Egyptians.

The Greeks developed the concept of binding, that a magician could take physical or spiritual control of another person or object, even of a body as massive as the moon, through the proper rituals. As literary sources become more plentiful, there are even names for individual sorcerers, such as Circe, who in Homer’s Odyssey enchanted Odysseus’s companions and turned them into pigs, or Erichtho, the witch whom Roman poet Lucan recounts raised a corpse from the dead by pouring the spittle of a rabid dog upon it.

While many cultures produced specific, ordered rules for magic—few quite as many as Japan, which even had a ministry of magic—others retained a looser sense of the infinity of spiritual power. For the Maya, the observation of the cosmos and an awareness of vast cycles of time, the inhalation of psychotropic smoke to enter the spirit world, and the belief in spirit animals that accompanied powerful magicians echoed the earliest Neolithic magical beliefs. In the ancient world, chaos and death were never very far away and the desire to stave these off, if only for a short period, meant that magic was ever-present. 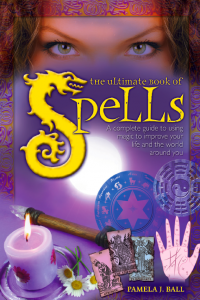 The Ultimate Book of Spells A Complete Guide to Using Magic to Improve Your Life and the World around you.